BIOGRAPHY
Allara is a powerful Yorta Yorta winyarr. She is a storyteller, composer, director, producer, musician and soundscape designer. With humour and integrity, Allara uses the double-bass and sound samples from Country to weave textures for healing in her work “I am Sovereign, I am Free”. Allara's innovative music speaks to Blak justice and sovereignty.

Allara was the recipient of the Archie Roach Foundation Award for Emerging Talent (Music Victoria Awards 2021) and is a founding member of Ensemble Dutala.
Allara is driven by collaboration and improvisation, inspired to bring language and cultural practice to the forefront of her work. Mentored by matriarchal Songwomen; her Djetja, Dr Lou Bennett AM, Deborah Cheetham AO and anganya Nancy Bates, Allara has become an unstoppable force for love, art, music and transformation, empowered by her yakapna (family) and her Ancestors, dhama yenbena (old people).
What is Allara up to now...
ALLARA & OLENKA
share
REKINDLED SYSTEMS
Regional Tour 21 Oct - 31 Oct 2022
Rekindled Systems is the song Yorta Yorta artist Allara sang that called in the spirit of Ukrainian Canadian artist Olenka Toroshenko. The following day it was Olenka’s recitation of ‘Walk into the Fire’...
...that unlocked the passageway to what has become a deep kinship and creative collaboration. While cutting beets for borshch on Sviat Vechir (Ukrainian Christmas Eve) in Jan 2020, the pair realised they are BOTH descendants of people who survived genocides intended to annihilate a peoples and their cultural identity. With resilience and direct intent, Allara and Olenka call upon the guidance of their Elders and Ancestors to navigate the troubling state of our current cultural paradigm and planet. Rekindled Systems is a living document, an ode to Mother Earth’s beings that activates the power of language, story, song and ceremony to heal spirit and culture.

Rekindled Systems is supported by Creative Victoria and Australia Council.
NEW RELEASE - diyalana - Produced by Allara & Coree Thorpe aka Lucid Juncture
diyalana, translating to silver wattle in Yorta Yorta, is a collaborative project between musician and composer Allara, and visual artist Coree Thorpe. It is presented in 4 new visual artworks, 4 new compositions and 4 new film clips. It’s a project that explores ourselves, our Yorta Yorta culture and our hopes for the future.

We encourage you to discover your own interpretation or feelings about the ideas expressed in the works. All the music is instrumental, except for in ‘ngatha nhawa-l nanyirr’ when Allara sings “I’m looking for my digging-stick”. Using the power of composition, the music shares an album length journey alongside time-lapse videos of Coree creating the artworks.

Do your own research, think critically and find out more about the stories we are sharing. We do not accept ignorance, therefore we hope that this project inspires you to learn about the Country where you live, and the people that came before you.

Like the versatile plant itself, diyalana is a collaboration between yamak (cousins), sharing different aspects of our kinship, culture and history; we hope it touches you like it has us.
NGARWUL - OUT NOW
Allara · Ngarwul
Ngarwul, meaning ‘to look’ in Yorta Yorta is a sound journey practicing Gulpa Ngarwar-l, an Indigenous way of deep listening, seeing, feeling, learning and responding. The piece goes for 13 mins and is intended to be listened to with headphones or your favourite speakers, laying down or sitting still, with your eyes closed. This piece is a gift for you, so I encourage you to download for free from Soundcloud or Bandcamp.
This project is supported by Songlines Aboriginal Music Corporation and Shiralee Hood, big thank you for all your support you mob ❤️
Plus a huge thank you to Aunty Dr Lou Bennett for all the language support, wisdom and understanding you shared in the naming of this work.

Mixed by the legendary Russell Fawcus
Mastered by legend Richard Stolz Woodstock Studios
Artwork by Allara and boss legend Ayesha Mehta
--
Allara’s approach to music is inspirational to other musicians and First Nations people. Finishing her Bachelor of Music Performance in 2016, she kicked off her music career accompanying Archie Roach at the Sydney Opera House, at the time being the youngest on stage at 22 years old. Last year was huge for Allara, she started off by receiving the International Women's Day First Peoples Emerging Artist Fellowship supported by Helen Marcou from Bakehouse Studios and Briggs from Bad Apples Music. She performed across multiple states and collaborated with numerous First Nations artists across Australia and was a nominee on the Longlist for the Corner Award 2019. Ending the year as a nominee for The Music Victoria Awards 2019: Archie Roach Foundation Award for Emerging Talent, Allara is on the cusp of a brilliant career and a must-see artist in 2020.
Through 2020 Fires then Covid, a year Allara was bound for great things - she did not let that stop her. During National Reconciliation week waves were made with the drop of her latest second single 'Murnong Farm'. Since July Allara has been working as the Lead Facilitator of the inaugural First Nations Womxn in Music Victoria 12 Week Program, bringing womxn from across Victoria and Australia together. Continuing to perform multiple gigs as live streams, the MLive Gallery Sessions at Monash and VIC NAIDOC week Concert at Arts Centre Melbourne were some highlights as the First Nations duo Allara and Culture Evolves (Brent Watkins, Gunai Kurni, Noongar Yamatji didgeridoo player, dancer and artist) moved online audiences to tears while generously sharing their stories in an educational yet creatively profound way. Finally Allara was nominated for a NIMA (National Indigenous Music Awards) in the category New Talent of the Year. This year Allara's first two performances have been at Sidney Myer Music Bowl, part of 'Live at the Bowl' Summer series. With even bigger plans to come for 2021 stay tuned for what this creative entrepreneur does next!
facebook.com/allarabriggspattison/
SovReign Sounds
This inaugural playlist, SovReign Sounds, has been curated by Allara, whose Yorta Yorta culture inspires her work on every level. SovReign Sounds is an epic playlist sharing 85 tracks from over 80 First Nations Artists across Australia. At 5 hours and 16 minutes, this composition tells our First Nations stories old and new, through heartbreak, healing, survival, resilience and growth. Designed to be listened to from start to finish, SovReign Sounds is carefully tailored to take the listener on an intimate journey across time and space.

First Nations Playlist is a rich audio experience playing throughout Arts Centre Melbourne’s public spaces. Immerse yourself in music composed of songs by First Nations artists – available for all to enjoy. The first in a series of playlists, you can also listen to these tracks anywhere, anytime by following the Australian Music Vault on Spotify.

Allara’s music also features in the playlist showcasing her simple double bass grooves which hold hard-hitting spoken word poetry and earthy vocals. "This playlist is just a glimpse into First Nations music. There are so many amazingly talented and hardworking Indigenous artists out there, representing diverse mobs, languages, spirit and culture." - Allara

Love for Country, culture, and kin explode throughout the music. Hope for social justice and spiritual healing for all People and Country will prevail, until there is no longer need to write protest songs or songs to express the grief of colonisation and genocide. Allara hopes this playlist is a step in that direction and that one day the Songlines of this Country will be as important to the world as it is to First Nations song-people.

Warning: Please be advised some of the tracks include coarse language. Radio edit versions of the tracks will be played in Arts Centre Melbourne public spaces.
‘BEAUTIFUL SUNSHINE’ Documentary

We follow Melbourne based musician Allara, a young Yorta Yorta woman, on her journey to reconnect with her family and culture. Along her journey, Allara learns of her family’s ongoing fight for recognition as the Traditional Owners of southern New South Wales and northern Victoria. This is a story to inspire all, but in particular, to encourage and exhilarate younger generation Indigenous Australians to maintain and re-connect with their families and Country, encouraging a traditional flow of culture and history, and connection while sharing strength and weakness to heal from intergenerational trauma many Indigenous people feel, caused through colonisation. The documentary, Beautiful Sunshine, is appropriately titled after her Mum ‘Sue Briggs’ interpretation of Allara’s Aboriginal name.

Nancy Bates (nancybates.com), and Allara have formed a collaborative duo 'Dhungala Baarka - Two Rivers, One Song'. Having met as band members for Archie Roach in 2016, they have fostered a unique musical relationship. This innovative duo have arranged songs from Bates' new album 'For Your Love' to be released in 2018, to present what is undeniably, some of the most exquisite, and emotionally charged original songs in Australia today. Guitar, double bass, soulful vocals and gifted story-telling personifies this new duo, and is unlike anything being delivered nationally, or internationally. Through the development of contemporary music, by Australia's ‘First Women’, Bates and Briggs Pattison are the continuation of Ancient Songlines, connecting Yorta Yorta, and Barkindji. Archie Roach considers Nancy Bates to be amongst the finest of singer/songwriters in Australia today. Young Yorta-Yorta woman, Allara Briggs Pattison, is a rare entity within the Australian Music Industry. With a Bachelor of Music, graduating in 2015 (Bassist and Double Bassist), Allara is on the cusp of a brilliant career.

Robert K Champion moves audiences with his haunting guitar music and compelling stories of life, love and loss across the Australian landscape. Known as a deadly guitarist, in 2013 Robert released his EP, ‘This Road Is Too Long’. Allara and Robert have been great friends and musical mischievous since they met in 2016. Roberts long-awaited debut solo album ‘1977’ is due out 9th November 2018. Pre-order details on their way… See website below. You will be able to hear Allara's bass lines throughout this album too!

Hot off the back of 2015's 7" vinyl release 'Swells', Up Up Away have developed a sound that harnesses the rawness of 60s/70s funk and soul, along with silky smoothness of the modern soul era. The uniqueness of Up Up Away's music lies in its ability to be hard-hitting, whilst also remaining blissfully laid-back and dreamy, laden with kaleidoscopic layers and textures. Although no longer gigging you can still find the Up Up Away's music through bandcamp, youtube and facebook.

Not even in Ireland would you hear a sound as rich, full bodied and unique as Zeon. Like a fine Irish single malt, their liberated melodies were distilled in the streets of Ireland and matured in the laneways and bars of Melbourne, Australia.
The five piece, which fuses traditional and modern Irish tunes, with hints of folk, bluegrass and country, consist of: Zenita O’Neill on vocals, bodhrán and guitar; Tommy O’Neill on fiddle; James Wisely on guitar, vocals, mandolin and banjo; and the recent additions of Allara Briggs Pattison on double bass and Tyler Campbell on drums. (2015)
Although Allara is no longer performing with Zeon she still enjoys putting on their CD's or watching the fantastic film clips on youtube that they made during 2015. You can still hear Allara's bass lines throughout Zeon'z EP Drifer. 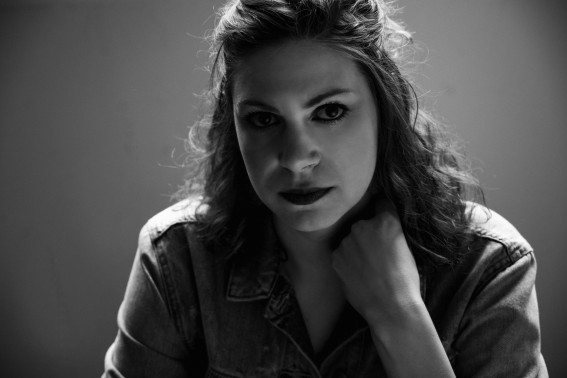 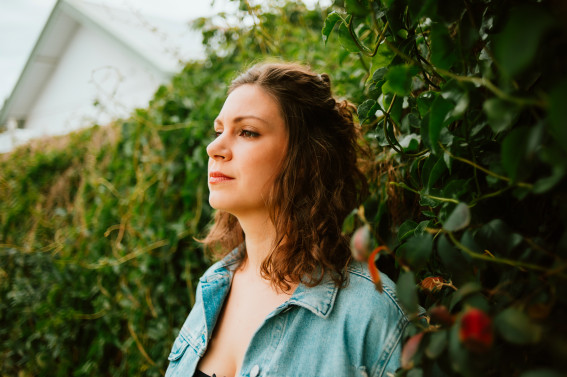 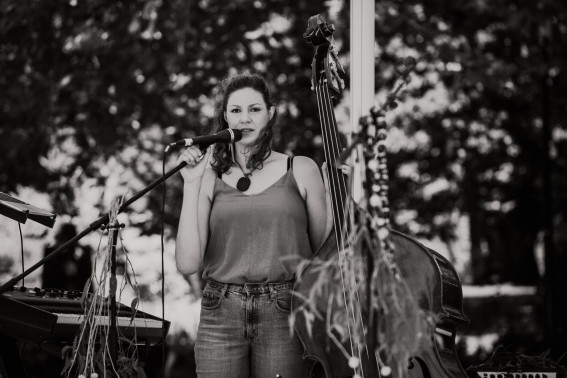 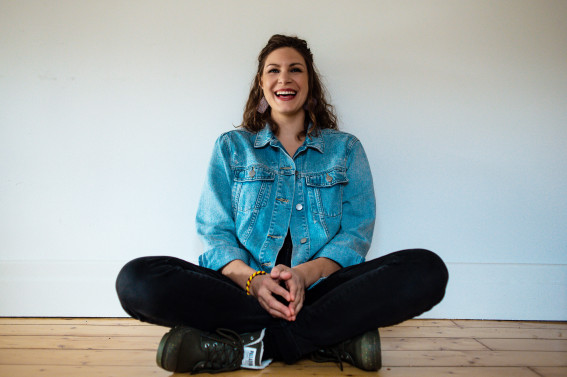