"Music with soul and depth", Ear to the Ground
"Truly authentic and expressive", The Ark of Music

Ernest Aines is a contemporary Indie alt folk songwriter from Melbourne. Weekend Notes writes "Port Fairy Folk Festival highlights, Ernest Aines is one to watch - multi award-winning contemporary folk singer-songwriter delivers with eloquent wordplay. Along with Archie Roach, Ernest was an artist I was lucky to experience".
INDUSTRY BIO:
Intricate finger-style guitar and dreamy vocals reflect the deeply contemplative and evocative lyrics of Melbourne’s Ernest Aines.
A multi-award winning songwriter, noting over a decade of experience, Ernest’s uniquely pure and thoughtful sound has enchanted both fans and critics across the globe.

Ernest’s journey began with busking in the streets of Melbourne, and progressed to him gracing the stages of celebrated events like The Australian Open, The Melbourne Grand Prix, The Port Fairy Folk Festival, Rockhampton Riverfest, and Canberra’s Floriade Nightfest. He has
appeared on stage at Ararat Live, Palais Theatre, and Northern Arts Hotel, and his indie-folk styling and unique vocal delicacy has been compared to James Taylor, Jeff Buckley, Ray Lamontagne and Bon Iver.

In 2021, Ernest was selected for the Sounds Australia Folk Alliance International Showcase, an achievement that would see his presence within modern folk grow exponentially in the months to follow.

He has since released three original singles from his highly-anticipated new album – a project five years in the making. The single ‘Rigged Games’ spoke volumes on behalf of Ernest’s unfiltered, authentic approach to the art-form, with live performance clips depicting a
compelling devotion to the heartache and desperation of the writing. Along with the single ‘So Far’, the new music has amassed thousands of streams online, and Ernest’s second single ‘Yellowstone’ earned high-rotation at ABC Country.

Ernest’s commitment to captivating live audiences has evolved to unrivalled levels, thanks to his consistency and unwavering skill for the process. 2023’s calendar is swiftly filling up, and already promises sets at St Kilda Festival, Melbourne Newstead Folk Festival, and a Folk
Alliance International Showcase in Kansas, USA.

Armed with only a guitar and a stomp box, Ernest’s humble arrangements lay bare the evocative nuances and innate charms of his approach. A master of both the stage and the studio, Ernest brings together poetic musings and contemporary storytelling – inspiring a sense of
wonder and depth that’s unmistakable once it’s crossed your path.
----------------------------------- 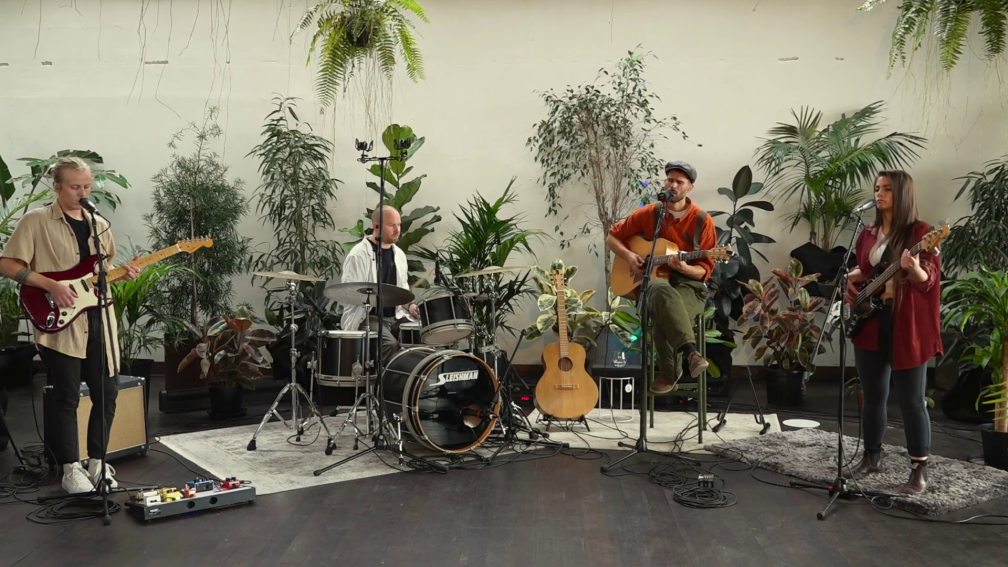 Melbourne’s multi-award-winning artist Ernest Aines continues his climb within the thoughtful and passionate singer-songwriter realm, with the release of a heartbreakingly honest, musically sublime Rigged Games.

Featuring delicate, breathy and emotive vocals, alongside reverb-kissed acoustic finger-picking and live drums, the song builds up through near-falsetto verses towards the simple, satisfying short lines of a beautifully moody hook.

Mixed by Hugo Nicolson, known for his work on Radiohead’s In Rainbows, the set-up is naturally alluring blending aspects of alt-folk with a notably more mainstream core of melodic embrace and familiar sound-design. As such, the writing and Aines’ delivery of this is faultlessly presented, and captures the essence of heartbreak and confusion with piercingly genuine depth.

From creative verse references to the mighty resolve of a memorable hook, Rigged Games takes its place as one of the more timeless yet unorthodox depictions of love that the alt-folk arena has to offer. The post-six-minute piece even goes so far as to reinvent itself at the half-way mark, shifting towards breathy harmonies and a sleepy seductive progression, which suddenly balances beauty and loss with powerful poetic integrity.

This hauntingly blissful latter half is boldly hypnotic, and wraps up the artist’s encapsulation of the journey towards a broken heart with lasting impact.

"The singer’s signature finger-picked guitar directs an organic ensemble of wood and strings"
"Ernest delivers a soulful ode to the land of the geysers"
Review Post to Wire Posted on July 13, 2022 by DOUBTFUL SOUNDS

"the song spreads its wings as a hypnotic blues and folk mantra, built on foot-stomping, heavily rhythmic percussion and guitars that spiral and howl."
"Aines has an emotive vocal delivery that..sits somewhere between Iron and Wine, Ray LaMontagne and The Black Keys."