“The Occoquan River is one of the best songs of the year – Australian or International.”
Brian Wise, Off The Record, Triple R. Australia.
Highly acclaimed Irish singer songwriter now based in Australia, Gallie, was nominated as a finalist for International Song of the Year competition by Tom Waits. His music is best described as indie folk, with smatterings of an Americana style.
He has been compared to Bruce Springsteen, but for Gallie, he has his own singular style, both in song writing and the rhythmic sense of his songwriting craft. His friends call it the "Gallie groove".

2022 has also seen him explore his Irish heritage via Irish Traditional Music Super-group
Sionnach Rua's Great Irish Song Book, currently touring Australia.
Gallie will play the Port Fairy Folk Festival, 2023
His debut album - The Occoquan River - was met with wide praise in his homeland of Ireland, but also in his new home, Australia:
​
"One of the outstanding releases this year...The Occoquan River is brilliant"
Paul Gough, ABC Radio National, Australia.

"Sublime lyrics, tremendous melodies, sung by a singer with a voice that is both soulful and incredibly expressive…..One of my favourite records of 2015 by an artist from any country"
Micheal Park, The International Americana Show, Fm Radio, New York City
“One of the outstanding releases this year….The Occoquan River is brilliant.”Tex Miller, Forte Magazine

"Every track on The Occoquan River is carefully yet simply crafted, as if each has come to him effortlessly, organically and fully formed. The crown jewel of the album is the title track: a truly haunting, mournful piece."
Lukas Murphy, theMusic ★★★★☆
See more 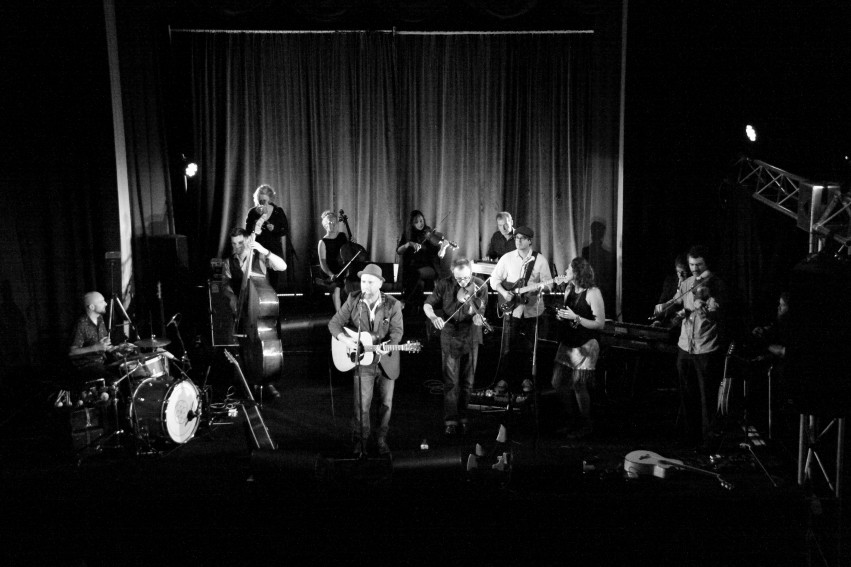 Gallie, the critically acclaimed singer-songwriter was born in Dublin city, Ireland, in the seventies.


Picking up guitar in his early teens, helped him navigate ‘the streets’, something he now reflects on as having provided him with a wealth of material for songs and stories that he continues to draw from.


Gallie’s music is captivating from the get-go; he and his band’s performance can move from a lonesome whistling entrance sounding like a lone miner in the Klondike, through to a wild folk guitar and band crescendo, added with Gallie’s gorgeous baritone voice, they give the grittiest performances of their lives. Joining him are JenAnderson on Violin/Fiddle, Danny McKenna on Drums, Tristan Courtney on DoubleBass and Daniel Brown on Keyboards.


Gallie’s 20-year musical career has seen him support an impressive line-up of international acts - Damien Rice, Lisa Hannigan, KT Tunstall, Glen Tilbrook, Squeeze, Newton Faulkner, Glen Hansard and The Frames - he has shared the stage with eminent acts such as Santana, Chris Isaak and Jimmy Cliff.  In Australia he has support The Black Sorrows, Mental as Anything and Renee Geyer and performed on stage with Liz Stringer, Suzannah Espie, Shane Howard and the late great Chris Wilson.


Such is the strength of his song writing, that Australian stalwart singer-songwriter, Steve Pigram, has recorded one of Gallie’s songs which he titled “Walking Blues”, it is titled “Look Away” on Gallie’s Occoquan River Album.  Gallie’s songs can also be heard on the multi award winning documentary series “The Bikes of Wrath”


Prior to that Gallie has lived the troubadour lifestyle, troubadour in the true sense of the word.  For over 15 years he has travelled the world playing every type of show imaginable, from busking on the streets of Paris to a 1000 seat sold out show with a 46-piece orchestra in Caxias Du Sol in Southern Brazil.  Having now lived in Australia for 11 years he has finally put enough roots down, to record his songs.


His highly lauded debut album "The Occoquan River” told stories of war, showcasing Gallies soulful performances with “the kind of lyrics that can transport you from a civil war battle to the warm comfort of your lover's bed.”


Music critics have compared him to the best - Tom Waits, Bruce Springsteen, Van Morrison , Wilco - not bad company to be in.

While Ireland’s RTE Radio 1’s Late Date presenter, Fiachna O’Braonain said “You can hear every mile travelled by Gallie on his adventurous journey to making The Occoquan River… it is a beautiful piece of work, that takes you on Gallie's literary journey and wraps you in the emotional truth of his music.”


Gallie is releasing a second album in 2022.