A didgeridoo virtuoso and innovator, who fuses this ancient instrument with electronic production and vocals, this music is about connecting to culture.

Ganga Giri started playing the drum kit at eight years old, and has travelled the world learning, studying tabla in India, and using a range of percussion instruments on stage, including djembe and congas as part of his rhythmic beat driven style.

Descendant of the Palawa people of Tasmania, Ganga has taken dance-floors of the world by storm with his unique Australian sound; modern primitive world music fused with deep earth bass music.

Ganga is also a founder of Didgeridoo Australia, a company that creates Aboriginal incursions and cultural experiences for schools, businesses and for corporate entertainment.

His dynamic sets create dance floors with a sense of community, uniting everyone with the high energy of his beats.

Duo with indigenous singer or drummer
Involves Ganga on stage with Multiple Didgeridoos and instruments with an additional world class musician ranging from Aboriginal Elders playing the didgeridoo to world class drummers or dancers. A duo is a bigger stage presence and band feel when the budget does not facilitate a full size band.

Full Band
The Ganga Giri Band was formed over years of stage hopping, searching for the sound and musicians he wanted to bring to his live set. The eclectic lineup was born. The sensual smooth vocals of Aishah Espinosa weaving in and out of the unusual melodic lineup of Michael Diamond on Harmonica and Tai Jordan on Trumpet sets up a sound that is fresh and exciting, swinging from almost a bluesy roots sound to soaring melodies over the energy of dance tracks held down by the solid beats of Dan Pearson on drums. With Ganga at the helm this group brings energy and sound like no other.
We can play an upbeat set and a chill set and also offer workshops.

“Ganga Giri is a wonderful musician. I loved the mix of his ancient and primitive instrument with a wide range of great dance grooves. Ganga is really taking the didgeridoo places it has never been before and developing a unique style of music." – Peter Gabriel

"Ganga Giri, a psychedelic tribe of musicians that create an amazing multi-layered blend of indigenous/electro/dance/rock, and upon my first vision of Giri dancing around the stage, waving his arms around and playing didgeridoo at the same time he’d won me over". - Faster Louder Review, Australia

"They stormed the fields of Wakarusa with their interpretation of ancient/modern cultures. The sound, the presence, the energy was overwhelming – hands down, the highlight of the entire festival." Garret K. Woodward, Festival Review Wakarusa USA

“Ganga Giri’s performance at the Ottawa Bluesfest on a hot blistering afternoon grasped the crowd from the word get go and filled their bodies with percussive rhythms with instruments from around the world. Ganga’s performance was, as the French would say ‘mon coup de coeur’ that performed on main stage of the entire festival.” – Claude Faucon, Ottawa Bluesfest, Canada
See more 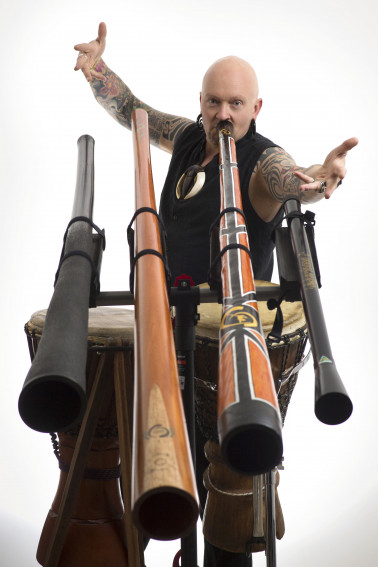